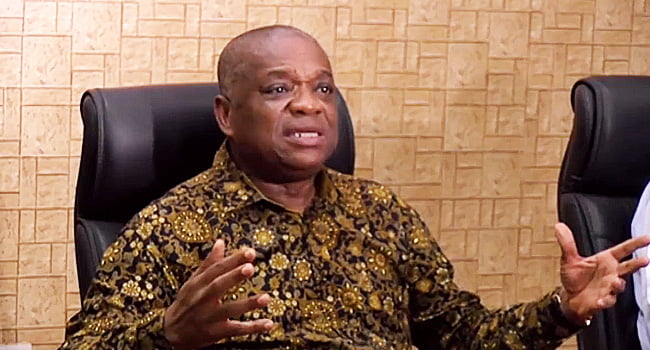 Former Governor of Abia, Senator Orji Kalu, has reacted to the claim that he would be the next Nigeria’s President come 2023.

Reacting, Kalu, however, said he will not reject the offer if he was given, adding that he is capable mentally and otherwise to lead the country. The lawmaker made this known during an interview with Channels Television’s Sunday Politics on Sunday, April 25. “I am not having that kind of ambition. But if I am given, why not? I can take it.

“I am a Catholic. In the Catholic church, we don’t see visions. Well, if visions are being seen, and people say this and that, if it is the will of God that I will become president, why not? “I am very capable mentally and otherwise to do whatever Nigerian people want me to do but not through prophecy,” the former governor noted. “I believe if Nigerians and the Nigerian people want to be fair, a Southeast president from Igbo extraction will be the next thing to do,” he added.

Panic in Owerri as gunmen shoot Imo commissioner and others

BBNaija: Organisers reveal when the list of Season 6 housemates will...