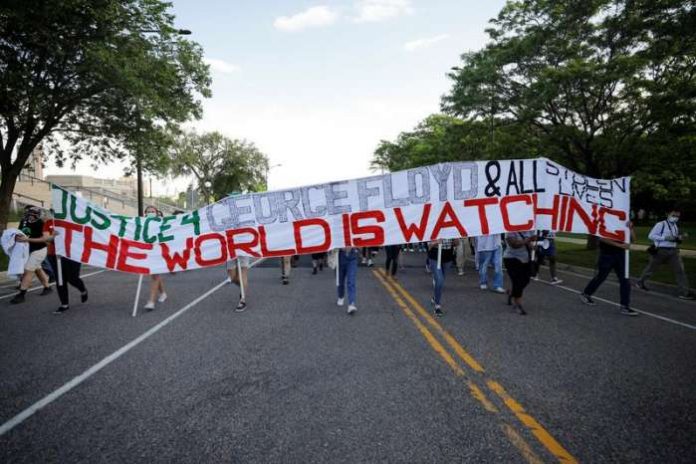 Members of George Floyd’s family spoke with U.S. lawmakers before a scheduled meeting with President Joe Biden on Tuesday, urging them to pass police reform legislation in Floyd’s name on the anniversary of his death in Minneapolis.

Floyd, a 46-year-old Black man who had been handcuffed by police, was killed by a white officer kneeling on his neck for more than nine minutes. His death prompted protests against racism and police violence in numerous cities around the United States and in other countries and led to policing-reform efforts at the state and national level.

“We need to get this done,” Philonise Floyd, a brother of George Floyd, told reporters on Capitol Hill as he stood alongside House of Representatives Speaker Nancy Pelosi, a Democrat, and other lawmakers who promised to secure passage of the legislation, currently stalled in Congress.

Floyd’s relatives also are set to meet privately with Biden and Vice President Kamala Harris at the White House. Floyd’s daughter and her mother, along with Floyd’s sister, brothers, sister-in-law, and nephew, are expected to attend.

Biden is expected to discuss the progress of the proposed George Floyd Justice in Policing Act during the meeting. The Democratic president had wanted U.S. lawmakers to finish work on the legislation overhauling police practices by the anniversary of Floyd’s death. A bipartisan group of lawmakers in the House and Senate has been working toward that end.

Senator Tim Scott, the lead Republican negotiator, told reporters on Tuesday that a main point of contention remained qualified immunity, a legal doctrine that shields individual police officers from lawsuits in certain circumstances. Republicans oppose provisions in the bill rolling back such immunity, while many liberal Democrats say they would only support a bill that abolished it.

“We have a long way to go still, but it’s starting to take form,” Scott said.

In Minneapolis, a foundation created in Floyd’s memory by some in his family organized an afternoon of music and food in a park near the downtown courtroom where Derek Chauvin, the former officer, was convicted last month of murdering Floyd during a landmark trial in U.S. policing.

Chauvin, 45, faces up to 40 years in prison when he is sentenced on June 25. The three other officers at the scene have pleaded not guilty to aiding and abetting Chauvin, and will go on trial next year. The Minneapolis Police Department fired all four officers the day after Floyd was killed.

Later on Tuesday, mourners are set to gather for a candlelight vigil at the stretch of road where Chauvin knelt on the Floyd’s neck. Darnella Frazier, a teenage bystander, recorded the killing on her cellphone, uploading video to Facebook that horrified people around the world. Floyd had been suspected of using a counterfeit $20 bill to buy cigarettes.

On Tuesday morning, gunfire rang out near the intersection where Floyd was killed, smashing the window of a barbershop, according to police and eyewitnesses. It was unclear whether the gunfire was connected with the anniversary, and Minneapolis police said one person was treated for injuries that were not life-threatening.

By the afternoon, small crowds were gathering in the square for a festive, sunny afternoon of music and children’s activities. A man set out paint ready to create a fresh mural in the square, which has been closed to most vehicle traffic for a year and is filled with flowers and art commemorating Floyd and other Black victims of police violence.

Legislation has been pursued in all 50 U.S. states and the District of Columbia to increase the accountability or oversight of police, and 24 states have enacted new laws, according to the National Conference of State Legislatures.

The laws have included the mandating of body-worn cameras for officers, banning neck restraints or making it easier for the public to see police officers’ disciplinary records.

Still, some activists say such measures, which in some jurisdictions have been on the books for years, are insufficient to address systemic racism in the criminal justice system.

Derrick Johnson, president of the National Association for the Advancement of Colored People (NAACP), civil rights group, said he also would meet with lawmakers to urge passage of the legislation.

“It’s hard to say if race relations, specifically, are better now than they were a year ago because change takes a lot of time,” Johnson said in an interview. “We can’t change everything in a few months or in a year. But there’s a there’s definitely a new tone in this country.”

Xi calls for cooperation as video conference with Biden begins

Anyone waiting for me to stop laughing at Kpokpogri is a...