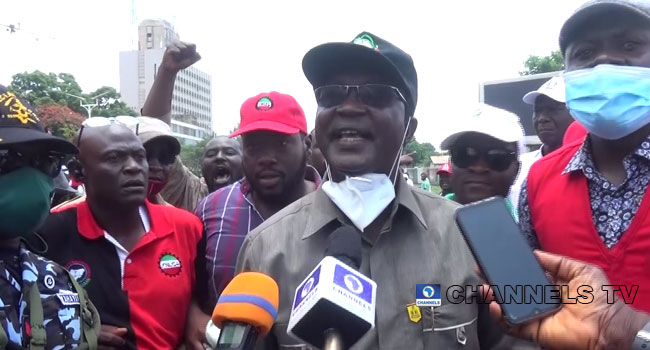 The incident happened on Tuesday.

It was gathered that the armed thugs also threw stones at the protesting workers.

The workers had converged at the popular NEPA roundabout in the Kaduna capital city to continue the day two of their protest when the thugs invaded the area and started throwing stones and other dangerous weapons at them.

The attack forced many of the protesters to scamper for safety.

It is not known who actually sent the thugs, but the NLC Chairman, Ayuba Wabba has pointed accusing fingers at the state governor, Nasir El-Rufai.

Speaking with Channels Television amid the protest, Wabba said he informed the DSS after he received earlier information of the plan to disrupt the protest.

“Today is a very sad moment in the history of democracy in Nigeria. Early in the morning today, we got credible information that El-Rufai has hired one Alhaji Hassan and some thugs to come and attack us.

“While we are here, they came but thank God we have chased them away because we have the number. We are not thugs And We Are Not Using Thugs we are Nigerian workers,” Wabba told Channels Television.

The armed thugs were dispersed by security operatives with teargas.

Wabba is leading day two of the NLC protest despite being declared wanted by the Kaduna State government.

Nothing Has Changed Apart From The Colour Of Your Hair Every...