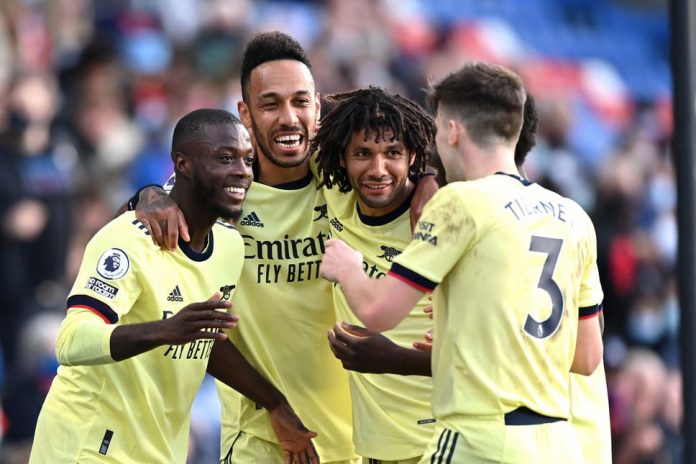 But it is both sides who have a part to play in the race now. Arsenal must still hope for destiny to go their way – wins for Spurs, Everton and West Ham sink them either way – but they face Brighton in a must-win clash. As for Palace? Why, Roy Hodgson returns to Liverpool, home of an ill-fated spell, with the chance to deny them Champions League football.

Until then however, thank you for joining us – and have a great week !But Mikel Arteta has a grin on his face as he exits stage left. Part of his side’s prospects will depend on how West Ham – trailing against West Brom – go tonight, but either way, they will be a point behind Tottenham, who must play Leicester, and Everton, who must play Manchester City, heading into Sunday.

Roy Hodgson is tearing up as he walks down the sidelines and applauds the fans. It is a standing ovation for the veteran manager once again, if not the finish on this ground that he would have wanted.

He looks set to head down the tunnel, before he’s called back – the crowd won’t let him go quietly without signing his name one more time.

There is no fantasy farewell for Roy Hodgson from the home of his boyhood club, as Arsenal tee up a last-day shootout for Europe with victory over Crystal Palace in the Premier League at Selhurst Park.

A Nicolas Pepe double has opened up a pathway to continental football that seemed all but gone at the turn of the near year – and the Gunners sit on the cusp of a remarkable turnaround. At full-time, it has finished Crystal Palace 1-3 Arsenal.

Carabao Cup: All the 8 teams that qualified for quarter-final confirmed