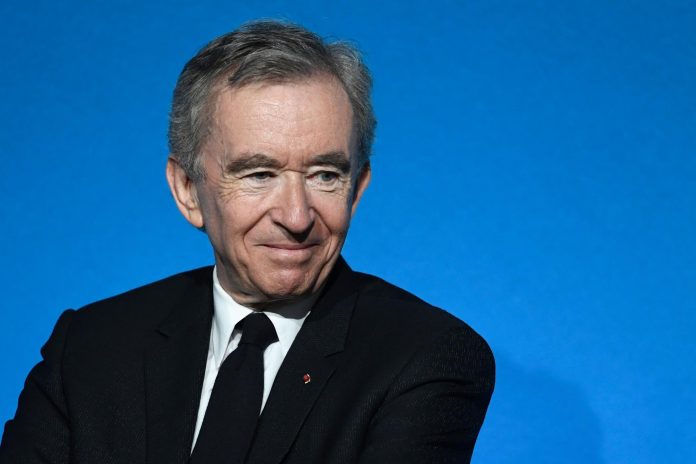 French fashion tycoon Bernard Arnault is the world’s richest person this Monday morning, with an estimated net worth of $186.3 billion—putting him $300 million above Jeff Bezos, who is worth $186 billion, and Elon Musk, worth $147.3 billion.

Arnault’s fortune has jumped from $76 billion in March 2020 to $186.3 billion on Monday, a massive rise of over $110 billion in the past 14 months, thanks to a pandemic-defying performance by his luxury group LVMH (Louis Vuitton Moët Hennessy).

LVMH, which also owns household names like Fendi, Christian Dior, and Givenchy, rose 0.4% during the first hours of trading on Monday, putting its market cap at $320 billion and pushing Arnault’s personal stake up by more than $600 million.

LVMH and Arnault represent the remarkable rise of Europe’s luxury and fashion houses during the lockdown.

Pushed by the “momentum” of shoppers in China, according to Jefferies analyst Flavio Cereda, LVMH recorded revenue of $17 billion for the first quarter of 2021, up 32% compared to the same period in 2020.

In the period from March 18, 2020, to Monday, the net worth of rival François Pinault, whose Kering Group owns luxury brands Saint Laurent, Alexander McQueen and Gucci, rose from $27 billion to $55.1 billion. At Chanel (which is not publicly traded), brothers Alain Wertheimer and Gerard Wertheimer, the grandsons of founder Pierre Wertheimer, are now worth $35 billion, more than double their net worth of $17 billion in 2020. Even Francoise Bettencourt Meyers, the granddaughter of L’Oréal’s founder, enjoyed a nearly $40 billion bump, to $87.8 billion Monday.

Over the years, the very top of Forbes’ billionaire’s list has been largely dominated by Americans. The number one spot has been occupied by U.S. citizens Bezos, Musk, Gates, and Buffett for the best part of two decades, with only Mexico’s Carlos Slim disrupting their dominance for any notable period of time.

For a number of years at the start of the century, the richest Europeans were Aldi founders Theo and Karl Albrecht of budget supermarket fame. They made it to the top 10 but never claimed the No. 1 spot. Bernard Arnault debuted among the top 10 in mid-2005, with a $13 billion fortune. Arnault has been in the top 5 since 2018 and was No. 11 the previous year. He became the third-richest person in 2019, with a $76 billion fortune. He even overtook Bezos to briefly become the world’s richest person, at around 10:30 a.m. EST on December 16, 2019, when he edged past Bezos. Amazon stock eventually closed higher, knocking the French tycoon back to No. 2.

Since the start of the pandemic, the net worths of the world’s richest people have fluctuated wildly, with many jumping by billions. Elon Musk briefly became the richest person in the world in January 2021, when his net worth hit $189.7 billion. That represented an astonishing $165 billion gain since March 2020, when he was worth $24.6 billion.

Elon Musk asks Twitter users if Trump should be reinstated