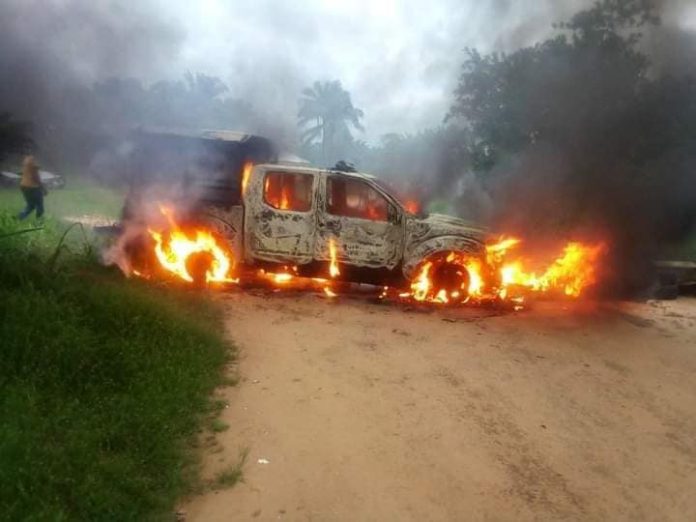 Some gunmen again on Wednesday set ablaze a divisional police station in the Etim Ekpo Local Government Area of Akwa Ibom State and killed one officer.

The officer, one Police Constable, Edogi Bassey, was gunned down by the hoodlums during exchange of fire between policemen and the assailants.

The Police Public Relations Officer in the state, Odiko Macdon, who confirmed the attack in a statement in Uyo, said the hoodlums drove into the station in two vehicles loaded with dangerous weapons including AK-47 rifles.

The statement titled, ‘Police repelled attack at police stations’ read in part “At about 6:30am today, armed men in their numbers, armed with AK 47 rifles and other dangerous weapons, in two vehicles attacked the rented building housing the Etim Ekpo Area Command and Division.

“The undaunted and vigilant police officers on duty gallantly fought back, repelled them and averted the intended carnage.

“Unfortunately, a dedicated officer, one PC Edogi Bassey, paid the supreme price while a small portion of the building was torched.

“The gunmen who proceeded to Ika Division to perpetrate their nefarious activities were successfully again repelled leaving the station intact without loss of lives or arms.”

The statement added that the worrisome situation is being addressed by the police hierarchy and required the collaboration of all, adding that Commissioner of Police in the state, Andrew Amiengheme, had visited police formations and had called on law abiding citizens to volunteer timely information that will enable the police tackle the present security challenges in the state.

READ ALSO  Justice Odili: FG should be held responsible if anything happens to our daughter – Group warns