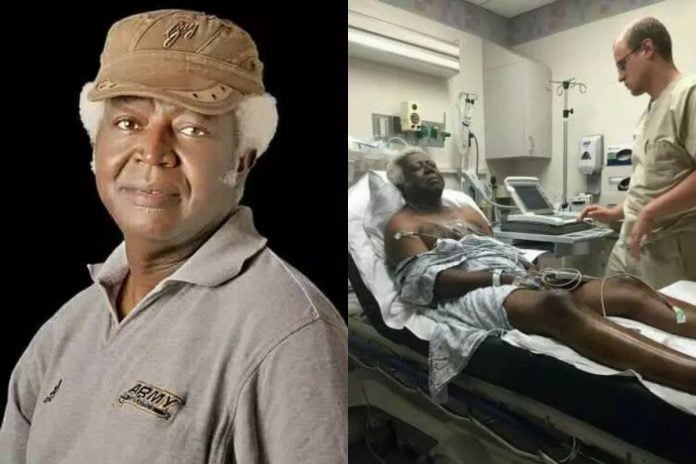 After a long struggle with diabetes, the actor died in the early hours of Saturday.

After a long struggle with diabetes, the actor died in the early hours of Saturday.

“On behalf of all Actors Guild of Nigeria members, the National President, Ejezie Emeka Rollas, expresses condolences to the immediate family members, relatives, and fans.

He begs God to console them during this difficult time.

“May the spirits of those faithfully departed rest in peace,” read the statement.

In 2015, the veteran actor opened up about his illness during an interview with Brekete Family on Human Rights 101.1 in Abuja.
According to the charismatic star, he had no idea he had diabetes until he was hospitalized after a brutal armed robbery attempt.
He was quoted as saying, “I’ve been to so many places for treatment; inside the country, outside the country, until finally…finally, the thing [diabetes] took one of my sights” (eyes). I’m just using one eye to look at you right now (eye). Glaucoma is the medical term for this condition.

“And it’s eventually impacting the other one. I discovered that this issue [the illness] is something that will last a lifetime. And it has cost me my career [as an actor]. And now, if I get a book, I won’t be able to read it properly. And if I read it, if I strain my eyes for too long, it would seem as if someone is leading me around the house or anywhere I want to go because it will only affect one [eye]. So that’s my issue.” At the time, he said that he wanted to be moved to a hospital in the United States, where he would be expected to pay N3.5 million.
Shortly after, Emeka Morgan Oguejiofor, CEO of Morgan Entertainment, contacted him and paid for his travel to the United States as well as his medical bills.

Mr Iwuoha was diagnosed with glaucoma and diabetes.

In January 2021, the Actors Guild of Nigeria launched an appeal fund aimed at providing urgent medical intervention to ailing Nollywood actors and assisting families of late actors. The late actor was listed as one of the beneficiaries of the appeal fund.

I Look Forward to Playing Key Roles in Battle With PDP...