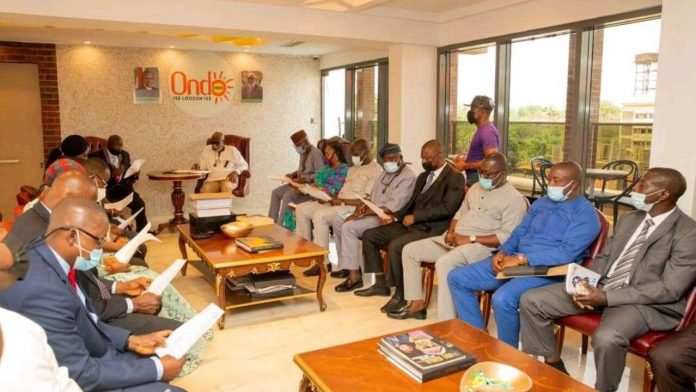 The Ondo judicial panel has recommended the payment of N755 million to victims of police brutality in the state.

The panel was set up in the wake of the October 2020 demonstrations against police brutality under the #EndSARS campaign.

According to NAN, Salisu Sidiq, chairman of the panel, submitted the committee’s reports and recommendations to Rotimi Akeredolu, governor of Ondo, on Wednesday.

Sidiq said the panel received 77 petitions, out of which 14 were criminal while 63 were civil matters.

He said the committee also recommended the publication of apologies in national dailies, particularly, where the reputation of victims had been tarnished.

The chairman also called for a review of section 84 of the sheriffs and civil process act (2004) “to enable judgment creditors enjoy the fruit of their litigations”.

“Apart from the monetary recommendations which totalled the sum of N755,730,897.88, the panel equally recommended publication of apologies in national dailies, particularly where the reputation of victims had been tarnished,” Sidiq said.

READ ALSO  No going back on grazing routes recovery – FG

“Mr governor sir, the panel, after careful consideration of its limitations in line with extant supreme court judgments on the powers of panels of inquiry to entertain res-judicata cases, I suggest that it is high time a review is carried out on section 84 of the sheriffs and civil process act (2004) to enable judgment creditors enjoy the fruit of their litigations.

“On the issue of vandalised property, the panel, after various visits to the ‘locus in quos’, observed that four out of the 18 local government areas, namely: Akure south, Ondo west, Odigbo and Okitipupa were affected during the #EndSARS protests.”

Responding, Akeredolu thanked the panel for a job well done, noting that human rights violation is one of the problems facing the country.

The governor assured the panel that he would go through the recommendations and do the needful.

Akeredolu said the #EndSARS protest was legitimate against police brutality, until it was hijacked by hoodlums.

“No one can convince me that the organisers of the #EndSARS protest were behind the destruction of property in Akure south, Ondo west, Odigbo and Okitipupa,” he said.

After the presentation, the panel was dissolved by the governor.

I’m proud of my accomplishments at 30 – Cuppy