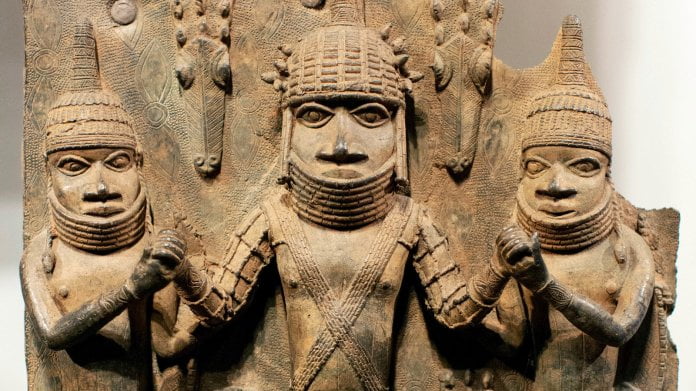 Some of the Benin artworks, which were looted from the kingdom more than a century ago, may soon be repatriated with the assistance of France.

This is sequel to the pledge by the the French government to partner with the Benin monarchy for the repatriation some of stolen artworks.

France Ambassador to Nigeria, Mr Jerome Pasquier, who disclosed this on Monday he led some officials of the French Embassy on a courtesy visit to the Oba of Benin in Edo State, South-South Nigeria, said that the French government was determined to eliminate all forms of discriminations and as well assist Africans in a dialogue to retrace their cultural heritage.

The French ambassador, who also commended the Benin monarch for steps he had taken to curb the menace of human trafficking in the country and Edo in particular, assured that his country was committed to Omo N’Oba’s war against human trafficking.

“We commend you for the effort you have put up to address the challenges of human trafficking and to assure you also that we are committed to the war against trafficking,” he said.

On his part,  the Benin monarch,  Omo N’Oba Ewuare Ogidigan II, described the partnership as a panacea for eradicating vices in the society.

“I also want to solicit the assistance of your government to revamp Nigeria’s dwindling economy through agro allied ventures,  to engage the teeming youths from seeking greener pasture abroad,” he stated.

The News Agency of Nigeria (NAN) also reported that the Oba told the ambassador to implement the outcome of the proposed dialogue on African Cultural Heritage to achieve the set goals.