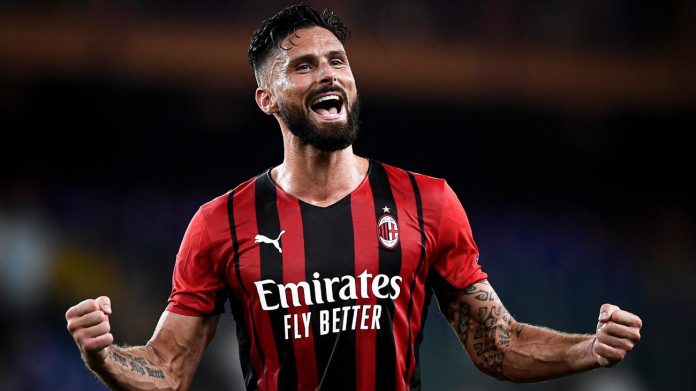 Olivier Giroud scored his first two goals for AC Milan to help his side maintain their winning start to the Serie A campaign on Sunday.

This was with a convincing 4-1 victory against Cagliari at San Siro, a contrast to last week when the Rossoneri were made to work hard for the 1-0 win over Sampdoria.

They proved far too strong for Cagliari as they put on a show for their returning supporters, scoring all four goals in the first half.

AC Milan were happy to keep hold of possession from that point on as they cruised to a seventh league game without defeat, stretching into last season.

Tonali lifted the ball over the Cagliari wall and just out of back-up goalkeeper Boris Radunovic’s reach to get AC Milan up and running inside 12 minutes.

It was just his second Serie A goal.

Stefano Pioli’s side were pegged back soon after through a Deiola header after the midfielder was picked out by a smart Joao Pedro pass.

It was the first goal AC Milan had conceded in seven league matches.

But Leao restored his side’s advantage in rather fortuitous circumstances as his shot took a big touch off the back of Brahim Diaz and AC Milan’s match-winner last weekend.

It flew past Radunovic.

He had a second before half-time when converting a penalty kick awarded for a Kevin Strootman handball.

AC Milan then went through the motions and did not register a single attempt on target in the second period.

Charalampos Lykogiannis however got closest to scoring for the visitors when testing Mike Maignan 10 minutes from time.

Results and standings Italian Serie A: