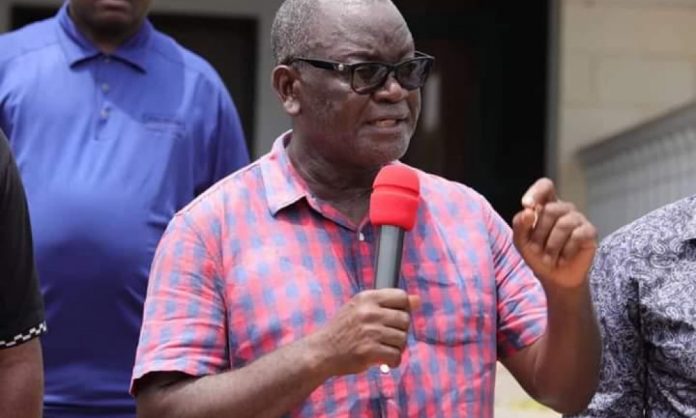 According to the group, such a visit with message of peace and hope will be an elixir to the traumatized victims of the needless strife that has rocked the two communities for months.

The group in a statement released Tuesday by its President, Egena Sunday Ode, also commended the gesture by the governor to assist victims of the communal clash in Konshisha but wondered why Oju, which also has a huge number of victims from the same conflict was not mentioned.

AIMPs also charged Governor Ortom to immediately initiate actions that will bring succour to the teeming unemployed  youth ias well as pensioners in the state.

“We,  the members of the Association of Igede Media Professionals  would wish to join people of goodwill, friends and family in felicitating with  the  Governor of Benue State,  Dr Samuel Ortom on his 60th birthday.

“We are delighted by his decision to visit  orphanages  and other vulnerable groups as well as commit to assisting the families of the 12 slain soldiers in Bonta on this day instead of rolling out drums in celebration.

“Dr Ortom was right on track when he said  the mood of the state did not permit such luxury. We commend him for his thoughtfulness on this occasion given the fact that few in his position would let slip by an opportunity like this without creating comets.

“We wish him good health, wisdom, courage, resources and resourcefulness to govern and lift Benue State out of poverty and misery.

“Birthdays are also moments of reflection. We would therefore urge the Governor to strongly reflect on the  deteriorating security situation in the state with a view to restoring peace through genuine  reconciliation across the hotspots.

“We would urge the Governor to visit  communities mired in violent conflicts, especially  Ukpute and Bonta with a message of hope. We recollect that his predecessor in office  Colonel Aminu Isah Kontagora (of blessed memory visited Ukpute and Bonta in 1997 three days after fighting broke out between the two communities. The peace he made held until 2020.

“We at the Igede Media Professionals were delighted by the decision  at an expanded security meeting in Makurdi that SEMA would render some humanitarian assistance to victims of collateral damage in Konshisha Local Government but we were  taken aback when no mention was made of Oju Local Government where communities like Ekingo, Obotu and Ukpute lie in ruins due to the same conflict.

“We would urge the Governor to extend this quality of mercy to all the broken communities irrespective of their ethnic origin.

“Beyond the issues of violent conflicts in the state, the occasion of 60th birthday should be a moment of reflection on the sickening misery and heart-breaking unemployment situation in the state. The latest statistics on unemployment by the NBS puts Benue a distant last with 43.5%. In our estimation, this is frightening.

“We do not intend to single out Benue State for the shabby treatment meted out to our senior citizens (pensioners) but we must be courageous enough to state that they have been particularly ill-treated in Benue State leading to early deaths, protests and other frustrations.

“We do appreciate declining revenue and inherited debts as impediments sometimes, but it should be of utmost concern to the Governor that the  state’s infrastructure is abysmally down while Makurdi looks like a third-grade city and not a state capital.

“The concern ought to be deeper when viewed against the background that His Excellency was only 15 years old when the state was created in 1976!

“Lest we are misunderstood, we do not hold against Dr Ortom alone the greying outlook of the city.

“Finally, a 60th birthday banquet is not one for trading accusations or blame but reflection and rediscovery.

“In light of this, we find it necessary to once again  wish Dr Ortom good health, wisdom, resources and courage to turn the state around, bind the bleeding communities, give succour to pensioners as well as reconcile the state with itself.

You lied against me, apologise, Ortom tells Atiku