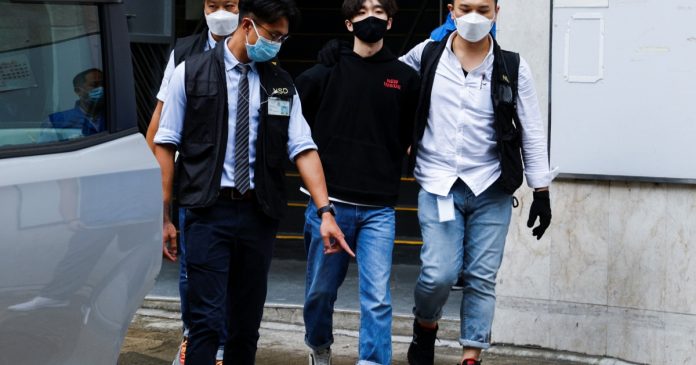 Hong Kong police, on Monday, arrested three members of a pro-democracy student group, accusing them of a “conspiracy to incite subversion” including helping deliver snacks to prisoners with the aim of recruiting followers.

Hong Kong police have arrested more than 100 people under a national security law that Beijing imposed on the former British colony in June last year that critics say erodes the freedoms promised when it returned to Chinese rule in 1997.

Beijing and the city’s government say the law is necessary to safeguard Hong Kong’s prosperity and guard against outside interference.

Police Senior Superintendent Steve Li told reporters that police arrested two men and one woman, aged 18-20, saying they incited hatred against the government and had urged others not to obey the law and subvert state power. He did not identify them.

Li said a group known as Student Politicism had set up street booths to spread what he called hateful speech against the government, including urging people not to use a government app aimed at tracking the spread of the coronavirus.

Police raided the group’s warehouse and seized large quantities of sweets, surgical masks, biscuits, lotion, and books – all items on a list of goods prisoners are allowed to receive from outside – as evidence.

But Li suggested democracy activists were using the items to win over followers in prison.

“Helping prisoners is not a problem but it depends on the intention,” Li said.

“If the intention is to help prisoners with the same beliefs and to recruit followers to continue to violate national security, it is a problem for sure.”

The group also used slogans declared illegal under the new national security law and told people to “prepare for the next revolution”, Li said.

The group said on its Facebook page that two of its leaders, Wong Yat-chin and Chan Chi-sum, were among the three arrested. It did not identify the third person. It did not also respond to a request for comment.

Wall-fare, a prisoners’ rights group that provided supplies for prisoners and connected them with pen-pals, disbanded last week after Hong Kong Security Chief Chris Tang had said inmates were using items, including sweets, to recruit followers inside prison and endanger national security.

The national security law punishes what China considers secession, subversion, terrorism, and collusion with foreign forces with up to life in prison.

Many of the city’s most prominent pro-democracy politicians and activists are in jail, either under the new legislation or after being convicted on other charges.

Afghanistan: Why terrorism may take over Nigeria like Taliban – Fani-Kayode

Why I Jumped Bail, Escaped From Nigeria – Nnamdi Kanu