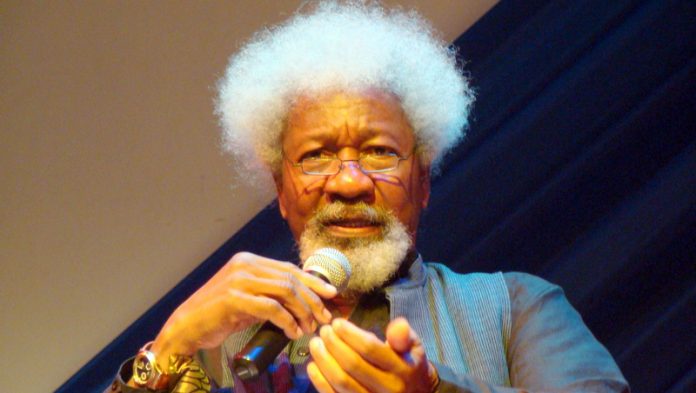 Prof. Wole Soyinka, the Nobel Laureate, says he now avoids reading newspapers for days to avoid the depression that comes from reading negative reports about insecurity and other anomalies in the country.

Soyinka went on to say that he does not believe Nigerian unity is possible under President Muhammadu Buhari’s current regime due to systemic failure.

Soyinka made the remarks on Saturday in Abuja at a book reading and signing for two of his books, titled ‘Trumpism in Academe’ and ‘Chronicles of the Happiest People on Earth.’

Former Imo State Governor Rochas Okorocha had asked Soyinka to write a Nigerian story that would inspire patriotism and unity among the country’s various tribes.

In response, the playwright stated that without restitution and justice, no narrative could unite the people of Nigeria.

He explained that people in IDP camps who had lost relatives and loved ones as a result of violence would not embrace any story of unity unless they received justice.

The Nobel laureate stated that Nigeria had missed a critical opportunity to unite, adding that he did not believe Buhari’s regime could unite Nigeria due to systemic failure.

There has been more than one moment and we lost the moment. Will another one come? I don’t know. Right now I don’t see it under this government quite frankly.

“There is a failure, a systemic failure in present governance and I don’t know who can put it together. These days, I try to go some days without reading the newspapers. It is so depressing.”

Soyinka said he personally believed that Nigeria should not break up but should remain one entity.

He, however, argued that it was wrong of the government to continue to say the country’s unity was non-negotiable.

London Musician Missing After Failing To Appear For Concert

BBNaija: Prince’s Family Embarrassed Me Over Our Relationship – Tolanibaj