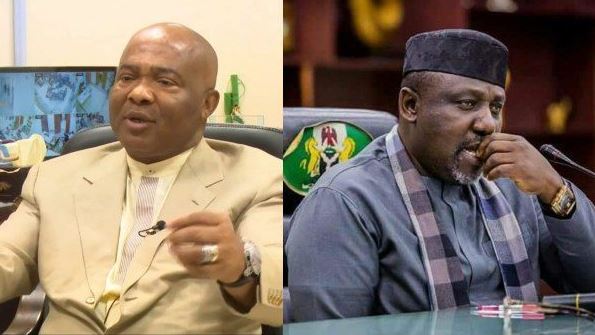 The proscribed Indigenous People of Biafra, IPOB has asked Governor Hope Uzodinma of Imo State and his predecessor, Rochas Okorocha, not to involve it in its ongoing political war.

This is just as IPOB said there was no truth in the allegation that it received a N500m donation from the former Imo State governor.

It said the two leaders did not have the financial capacity to bankroll its movement, describing their wealth as ill-gotten and bloodstained.

The group stated this in a statement signed by its Director of Media and Publicity, Emma Powerful, a copy of which was made available to The PUNCH, on Sunday.

The statement read, “They better fight their battle and leave IPOB out of their mess. None of them is good enough to receive our attention.

“They imprisoned and tortured our youths, mothers, fathers and other agitators to please their slave masters. Other politicians that may have sabotaged IPOB and ESN may be forgiven, but OkoroAwusa, Hope Uzodinma, and the wannabe Hitler of Rivers, Nyesom Wike, will never  be forgiven. They must pay for their sins sooner or later!”

2023: IPOB Reveals Those Who Attacked, Killed INEC Staff In Imo

Gunmen Kidnap Another Monarch In Imo, Kill One