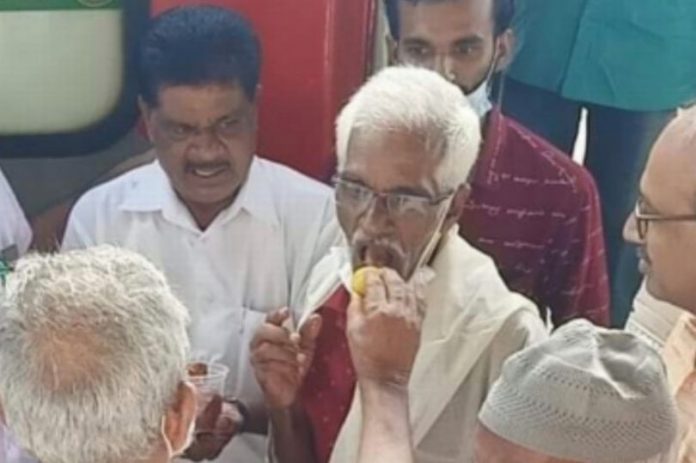 Sajjad Thangal, a 70-year-old man who was presumed dead after an Indian Airlines plane crashed in Mumbai in 1976 has reportedly returned home to his family 45 years later, Daily Star UK reports.

The overwhelmed man was welcomed back to his old village by friends, family, neighbours and local leaders.

Thangal’s life turned upside down in 1976 after a tragic plane crash in Mumbai, which claimed the lives of 95 people, including famous south Indian actress Rani Chandra.

The then 25-year-old Thangal worked with Rani Chandra and conducted cultural programs across the Gulf countries – both of them were due to be on the Mumbai flight, but a last minute change of plan saved his life.

Father K M Philip, founder of the Social and Evangelical Association for Love, an NGO in Navi Mumbai said: “He was planning to return with the troupe from Abu Dhabi on October 12, 1976.

“But due to some last-minute hitches with the organising committee he dropped his plan and survived the crash.”

Philip explained that the tragedy deeply affected Thangal, who lost many close friends and business associates in the devastating crash.

Sajjad Thangal was presumed dead by his family for 45 years (Image: Facebook)

The young man suffered a series of mental health issues and was forced to go ‘off the grid’.

“Those days insurance was not popular, and I lost a good amount of money. I was also scared that police will hound me. Almost everyone thought I was among the dead in the crash,” Thangal said.

He was later transferred into a shelter home ran by the NGO and underwent treatment for his trauma.

Philip explained that Thangal was an ‘introvert’ and found it hard to tell her story to the counsellors in the home.

He spoke to her on the phone, giving her the shocking news that he was in fact alive, and were reunited at his ancestral home in Sathamkotta on Saturday.

The man’s relatives had reportedly checked the passengers’ list repeatedly and failed to find his name – but due to the lack of information around the incident they presumed he had died.

“It is a dream come true for me. I never thought I would be able to meet my kin, especially my mother,” Thangal said.

A UK citizen has died after taking AstraZeneca Covid jab