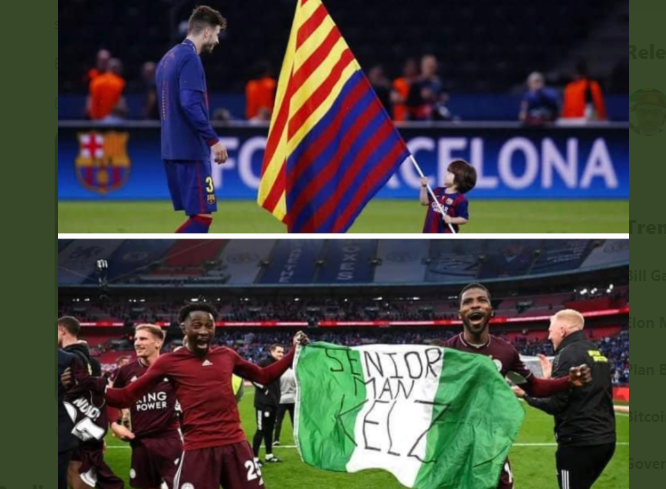 Kanu frowned at them displaying the Nigerian flag after their FA Cup victory in England, United Kingdom.

Both Iheanacho and Ndidi play for English club, Leicester City and defeated Chelsea with a lone goal at Wembley Stadium on Saturday to lift the oldest trophy in England.

In their ecstatic mood, both players who are Nigerians of Igbo extraction displayed the Nigerian flag.

However, they were criticised by the IPOB leader who noted that it shows they do not support his agitation for the state of Biafra.

Kanu, who has been a thorn in the flesh of the Nigerian government for his resilient and dogged call of Biafra nation and self-determination of the Igbo people expected the two compatriots to show support for his cause.

Kanu on his Twitter page on Sunday expressed his displeasure at the Nigerian internationals, citing a case of Spain and Barcelona defender, Gerard Pique, who openly shows support for his native region, Catalonia.

“Gerard Pique is a World Cup winner with over 103 caps for Spain. He never turned his back against Catalonia freedom. Severally, he has shown open support for Catalan freedom.

“But our Iheanacho & Ndidi with #Zoo flag? Broken heartBroken heartShame!

“Difference between White man and his Black counterparts,” Kanu tweeted.

We Are Not Aware Of Baba Ijesha’s Bail —Police Spokesperson