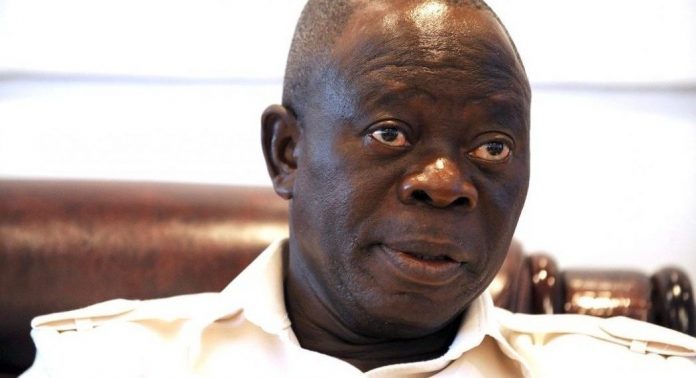 Adams Oshiomhole, former national chairman of the All Progressives Congress (APC), says the call for a military takeover of the country is absurd.

Oshiomhole said this in response to a statement by senior lawyer Roberts Clarke, who called for power to be transferred to the military.

On Friday, Oshiomhole told the leadership of the Law Students Association of Nigeria (LAWSON) that a military takeover is not the solution to Nigeria’s problems.

“I watched on a national television one of your very senior colleagues, Chief Robert Clarke, I was shocked when I saw him calling on the President to handover to the military,” he said.

“I thought that was the height of irresponsibility, given his knowledge, given his age and a very senior member of the bar and, what is it that he wanted? He wants a military that will restructure Nigeria.

“It is again for me senseless, because the structure as it is today, who put it in place? Who overthrew the parliamentary system?”

Oshiomhole said anyone who suggests unlawful means to effect change should be charged to court.

“You know we have freedom of speech but it does not include the freedom to canvass unlawful means to effect a change. When you canvas unlawful means, then you should be arraigned before a court of law and dealt with according to the law. Ignorance is not even an excuse in law, not to talk of a Senior Advocate of Nigeria,” he said.

The Nigerian military had also reacted to Clarke’s statement, describing it as “anti-democratic”.

He can’t try that with Maria, She is too classy”-Uproar as...

2023: I’ll Go Naked If Atiku Refuses To Handover To Southeast...