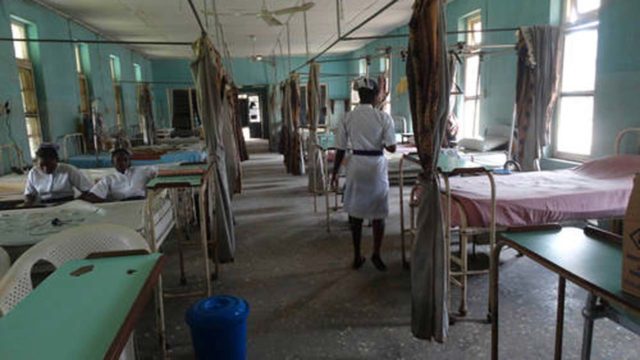 On Wednesday, there was an uproar at the Enugu State University of Science and Technology, ESUT Teaching Hospital/ParkLane General Hospital in Enugu, as patients and their relatives protested the bad food served to patients as well as the hospital’s poor sanitation due to a shortage of water. They also protested the nonchalant attitude of medical staff to patients especially those in emergencies which have caused many deaths at the hospital.

Mr and Mrs Leonard Onuchukwu, parents of a one-year-and-three-month-old baby girl, Daniella Onuchukwu, were said to have sparked the protest when they refused to pay the bill given to them, arguing that they would not pay the whole bill because of the meal that neither they nor their child ate because they were not fit, even for dogs.

It was gathered that as the Onuchukwu’s were discharged to continue the medication of their child in Abuja where they returned from, for a burial ceremony in Enugu, they decided to forcefully take away their child. Security men at the hospital tried to prevent them, which led to an uproar that led to police personnel being drafted to the hospital to quell the din as relatives of patients joined the Onuchukwu’s to protest the poor meals served at the children’s ward.

Fidelis Onuduagu, the hospital’s Chief Security Officer, told reporters that it was the hospital’s policy that meals served to patients admitted to the hospital must be accounted for, whether consumed or refused.

Other relatives of patients who left their sick ones at the wards in solidarity with the Onuchukwu’s and to also register their dissent over poor conditions of food and other services, corroborated the Onuchukwus. “I will not pay for the food when they discharge my child because we did not touch their food but bought food from food vendors outside. “How can I pay for food we did not take,” a relation of a patient who would not want his name mentioned said.

READ ALSO  At least 82 people were killed in the Baghdad COVID hospital fire.

Attempts to meet with the hospital’s Chief Medical Director, Professor Onah, were futile because the CMD could only be seen by appointment. Meanwhile, it was discovered that there is no water in the hospital because there are only water tanks that are locked and keyed. Patients will only drink or bathe if they get their water from somewhere other than the hospital.

I Was Tortured in a Lagos Prison; Now I Have Blood in My Cough and Stool – Baba Ijesha

At least 82 people were killed in the Baghdad COVID hospital fire.

Jeff Bezos Sells $2 billion Worth Of His Amazon Stock

Secondary Schoolmates Who Ridiculed Me When I Became Blind Shocked I...