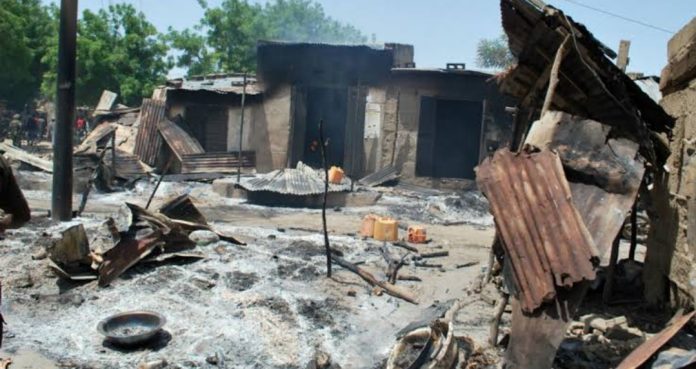 The Yelwa Zangam Community in Jos North Local Government Area of Plateau has appealed to the State Government to rehabilitate the houses destroyed during the recent attacks in the area and provide relief materials to the victims.

The community also urged the government to construct a police station and mobile police barrack to help in quelling future attacks in the area.

Mr. Sunday Bonu, the President of the Anaguta Development Association, made the call when Gov. Simon Lalong paid a condolence visit to the area on Sunday.

The News Agency of Nigeria (NAN) reports that the community was attacked on Aug. 24 during which more than 30 lives were reportedly killed and many houses destroyed.

Bonu said the construction of a police station and a mobile police barracks in the area would help in quelling attacks and other security challenges in the area.

“We need police station to be sited here to curtail security challenges. We want compensation for the victims of the attacks to alleviate their sufferings,” he said.

He also appealed to the government to reconstruct the bridge linking the community which was destroyed during the attacks, saying it should be upgraded to a concrete facility.

“We also need payment of hospital bills for those injured and hospitalised ,” the president said .

He,then,asked for the construction of alternative access roads in the area which he said, could serve as escape routes in insecurity situations.

He thanked the governor for his quick response in preventing the attack from escalating to other parts of the state.

Speaking on behalf of the victims, Mr Bitrus Pada appealed for justice for those affected by the attack,saying those arrested should be made to face the wrath of the law

In his remarks, the paramount ruler of Jos North Local Government,the Ujah of Anaguta Kingdom, Ujah Johnson Jauro,cautioned against the use of social media to spread false information to incite people.

Jauro commended the proactiveness of Gov. Lalong and security agencies in handling  the situation.

In his remarks, Lalong condoled with the affected families and the community and prayed for eternal rest for those killed during the attack.

He expressed sadness at the inccesant attacks in the state in spite of efforts by his administration to address the situation, saying the crisis was impeding development plans in Plateau.

He said 3000 vigilante personnel were being trained and equipped to be deployed to rural communities accross the state.

The governor promised that perpetrators of the attacks in the area and other parts of the state would be dealt with saying, ‘Nobody will escape,” he said.

He said he would ensure the establishment of police station in the community, adding that the state government would distribute relief materials to the victims.

He called for special prayers for the protection of Plateau people and the state against insecurity.

NAN reports that the governor conducted an assessment tour of the damaged bridge and the level of destruction in the community.