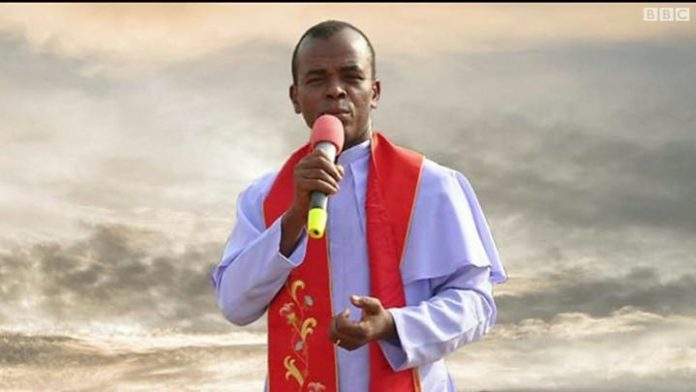 Mbaka was responding to Yekini Nabena, the APC’s Deputy National Publicity Secretary, who said in a statement that calling on President Muhammadu Buhari to resign or be impeached due to the current challenges is ungodly.

During his sermon on Sunday, Mbaka addressed the threat as well as other issues raised last week.

Nabena’s statement read in part, “One will wonder whom Father Mbaka is emulating because the Lord Jesus Christ did not threaten to bring down the government during his own time, in fact, Jesus Christ obeyed and honoured constituted authority.

“That’s why he paid his tax. We are calling on Father Mbaka to concentrate on his spiritual calling and stop speaking like politicians who it is obvious he (Mbaka) has been dining and wining with. “If Mbaka has found another political ally, it is better to leave a political message for politicians.

“Calling on President Muhammadu Buhari to either resign or be impeached because of the current challenges is ungodly.

“Father Mbaka should not, however, take his luck too far because there is a lot to tell the Vatican and the Pope about his person and his sources of inspiration.”

Dismissing threats to report him to the Pope, Mbaka urged the party to quickly do so, saying, “If the Pope knows I am speaking against bad governance, he will clap for me. So please, quickly go to Rome.

“Why I don’t even want them to go to Rome is because, if Rome hears about this, they may give me a position I don’t like.”