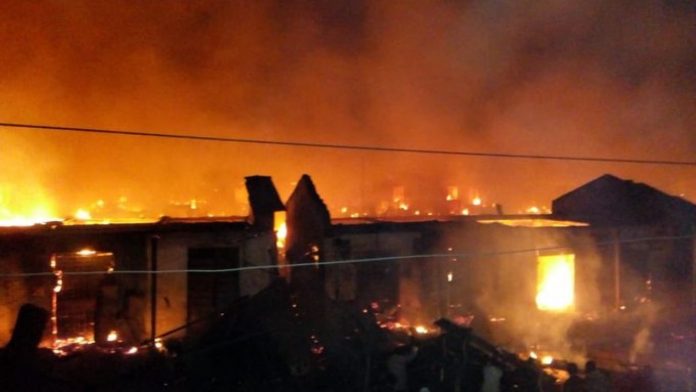 A police station has been burnt amid a protest by residents of Gauraka in Tafa Local Government Area of Niger State over incessant cases of kidnapping in the community.

The protesters blocked the Abuja – Kaduna highway where they burnt tyres and also called for improved security in the area. They lamented that no fewer than 15 locals have been abducted between Saturday and Sunday, and three others have lost their lives.

The state police spokesperson, Wasiu Abiodun confirmed the attack on the community and the station. Abiodun who blamed the protesters for the attack on the police outpost, said the command had deployed operatives in the area.

“Niger State Police Command wishes to confirm that today being 24th May 2021 at about 0300hrs, unknown gunmen attacked the residents of Angwan-Wazobia in Gauraka area of Tafa LGA where about six persons were abducted.

“Teams of policemen were mobilised to the scene and efforts to rescue the victims are being intensified.

“However, at about 0635hrs of the same date, some miscreants blocked both sides of Abuja – Kaduna expressway, protesting the recent cases of kidnapping in the community.

“The miscreants later extended the protest to Gauraka Police outpost, vandalized and set it ablaze.”

The police spokesperson who disclosed that efforts are ongoing to disperse the protesters from the highway to ease the flow of traffic on the road, noted that the command has dispatched reinforcement from Minna, the state capital to the Area Police Command in Suleja, as well as a joint task force from the Minna – Suleja highway to restore normalcy on the Abuja – Kaduna expressway.

NSCDC Reunites 13-year-old Boy With His Mother After Eleven Years Of...