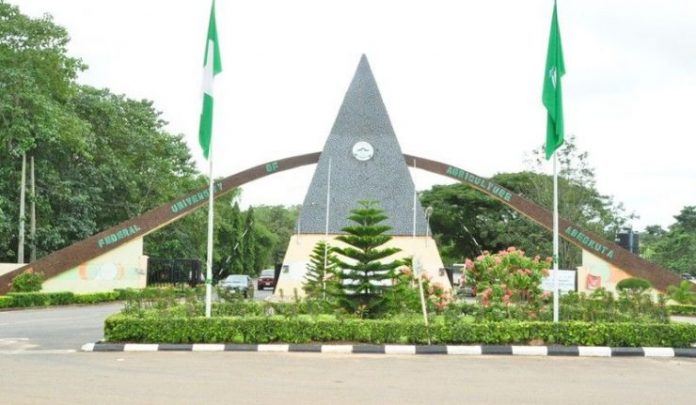 The students of the Federal University of Agriculture, Abeokuta, on Monday, took to the streets to protest the kidnap of their colleague, Olayinka Toyinbo, in Odeda, Ogun State.

The News Agency of Nigeria reports that the placard-carrying students took their protest to the Ogun State secretariat of the Nigeria Union of Journalists, Abeokuta.

The inscriptions on the placards included, “Free our student now”; “I am a student not a prey for kidnappers”, among others.

Speaking to newsmen, Michael Oloyede, President of FUNAAB Students’ Union, appealed to both the federal and state government to ensure speedy rescue of the abducted student.

Oloyede called on the government to do more in securing the lives and property of citizens by providing necessary facilities that would make their job of security agents easier.

“We are appealing to the government and security agencies to ensure the student is released within 72 hours, or we will shut down the state with another protest.

“The federal and state government should provide more facilities and equipment for security agencies,” he said.

Also speaking, the State Chairman, National Association of Nigerian Students, Damilola Simeon, urged the government to provide security agencies with drones and other equipment to aid their job.

Simeon appealed to relevant authorities to put all machineries in place to ensure the immediate rescue of their colleague.

NAN reports that Toyinbo, a 400-level student of Aquaculture and Fisheries Management of FUNAAB, was kidnapped on Saturday by suspected gunmen in Odeda, Ogun State.

The student was reportedly abducted in a private farm in Abule Itoko, Odeda Local Government Area, about 25 minutes’ drive from the institution, around 8 am on Saturday.

A friend of the abducted student, who claimed to have witnessed the scene, said Toyinbo, was kidnapped by the gunmen at the private farm, where he had been living and working as a practising livestock farmer, for the past three years.

Other sources, however, said that two other persons, also reportedly kidnapped alongside the student, were the owner of the farm and a 17-year-old Togolese lady.

Mr Abimbola Oyeyemi, the state Police Public Relations Officer, confirmed the incident, saying the Command has been briefed about the abductions and that the police were working tirelessly to ensure the safe rescue of the victims.

Chioma, Others, Sentenced To 141 Years imprisonment For Drug Trafficking