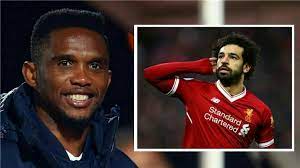 The Egyptian talisman has now equaled the Barcelona great in terms of goals scored in the knockout stage of Europe’s premier club competition.
By scoring against Real Madrid on Tuesday at Estadio Alfredo Di Stefano, Mohamed Salah equaled a Champions League record set by Barcelona legend Samuel Eto’o.
The Egyptian international equalized in the 51st minute after the Spaniards led 2-0 at halftime thanks to goals from Vinicius Junior and Marco Asensio in the 27th and 36th minutes, respectively.

Diogo Jota broke through the La Liga defense until his shot was deflected into the direction of Salah, who took a touch before shooting past goalkeeper Thibaut Courtois from six yards out.

VAR was called in to investigate a potential offside, but the score stood, giving the Anfield giants a valuable away goal. The goal ensured that the two-time African Player of the Year winner’s impressive streak continued, as he found the net on 27 times for Jurgen Klopp’s side in all competitions during the 2020-21 season.

Salah has now scored 10 goals in the Champions League knockout round, matching what the legendary Cameroonian did during his playing days with Barcelona and Inter Milan. The 28-year-old is two goals behind Senegal’s Sadio Mane, and he is closing in on Didier Drogba’s mark as the highest-scoring African in the knockout stages of the European elite club competition.

The Cote d’Ivoire and Chelsea legend has 14 goals to his name, an achievement he accomplished during his trophy-laden tenure at Stamford Bridge.
In addition, with his goal against Zinedine Zidane’s men, the Liverpool star has now scored in four consecutive Champions League games for the first time.
Furthermore, only Cristiano Ronaldo (140), Lionel Messi (156) and Robert Lewandowski (177) have scored more goals in the top five European leagues than the Egyptian (121).