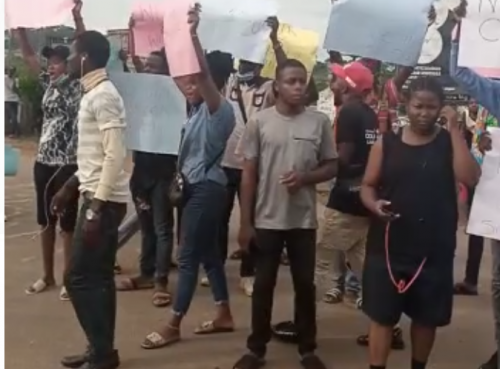 Some students of the Adeyemi College of Education in Ondo State have organised a protest against perceived extortion in the institution.

In a video obtained by SaharaReporters, the students were seen with placards on which were written their various demands, chief of which was the reversal of all fee increments.

One of the inscriptions read, “Education should be easy, pity us”, another reads, “No to hike in school fees”.

One of the students, who was addressing a member of staff explained how the Students’ Union Government has not been representing the interest of the students but had rather been behind an initiative affecting students.

He lamented the hike in fees, noting that the fees the students have been paying for ICT/Internet access have not been utilised properly, claiming there is no WiFi on campus. The aggrieved student also explained how, as a 400 level student, he has only been issued 100 level identity card despite the fees charged for ID cards.

A source told SaharaReporters that the institution’s management and some students delegates were at a conference on Monday and told to prepare a comprehensive list of demands for the Provost.

One of the concerned students, however, wrote, “Solidarity greetings to all concerned, aggrieved and oppressed students of Adeyemi College Of Education affiliated with Obafemi Awolowo University, Ondo state.

“It is with a great sense of collectivism and dedication to students struggle for reasonable education accessibility that I’m writing this to you all, basically to inform all students of the development regarding the struggle to demand the total reversal of all new fee increment and the betrayal attitude of our students’ union leaders.

“Yesterday, the concerned students of the college took a constitutional and legal right by protesting against the recent hike in tuition at all levels through the introduction of some detrimental fee aided by the students’ union that is saddled with the responsibility of defending the interest of her member when the need arises, without considering the present downfall in the economy of Nigeria and the post-Covid-19 crises across the world.

“Martin Luther King Jr said and I quote (silence is a crime in an unjust society). During the protest that held yesterday, the Dean of students’ affairs of the college showed some concern and intervened by holding a meeting with some selected representatives that participated in the protest whereby major demands of the students were tendered and after more than two hours of the meeting, the final resolution was made that all our genuine demands should be documented comprehensively and the breakdown of the tuition fee should be attached and submitted with the hope of expecting a necessary and positive effect from it on or before Friday (14th of May, 2021).

“After the protest yesterday, we received first-hand information that the outgoing students’ union leaders were in a closed-door meeting with the management which we definitely believe it will yield positively to our demands.

“To our surprise, a press statement issued by the outgoing union leaders shows that they were actively part of the recent hike with the following published positions: That the GLO CUG that was rejected by all levels will be paid by NCE 1 and NCE 2 students and Degree 1 and Degree 2 students including Direct Entry students.

“The above was agreed upon by union leaders with the management after the protest yesterday, but as an apostle of collectivism, we feel it is uncalled for, to sideline the Degree 1 and Degree 2, NCE 1 and NCE 2 students in the reduction of some charges, hence our dissatisfaction with the agreement.

“The general students’ demands are clear and simple: The GLO CUG charges that were cancelled for degree 3 and 4 students should be cancelled for all levels as students populace are saying no to it.

“Internet access fee should be cancelled as students have been paying for it in the previous years without enjoying it and if WiFi is needed, those previous payments should be used to implement the project for effective running.

“If all those demands are not met within this week, we will not hesitate to return to the barricade as we believe that education should be affordable for all. I also want to assure our union leaders that posterity will judge them all judiciously and accordingly.”