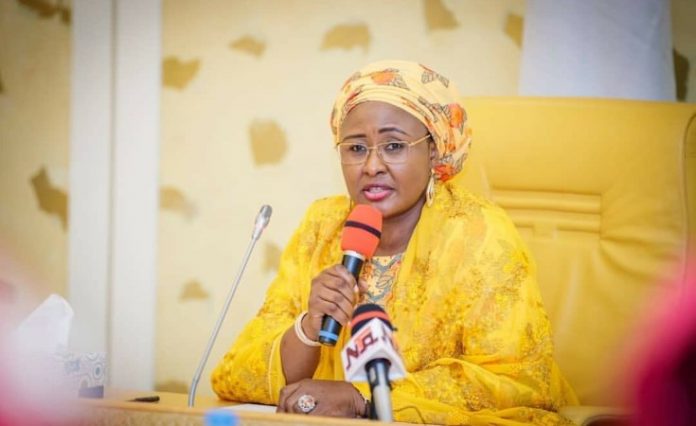 The First Lady, Hajia Aisha Buhari, has called on Nigerians to redouble efforts to eliminate the menace of drug abuse to enable the younger generation to attain leadership positions in the country.

Buhari, who was represented by Hajia Mairo Al-Makura, Special Assistant on African First Ladies Peace Mission, made the call on Tuesday at the fifth Anniversary/Award of the Presidential Diary Magazine in Abuja.

“Let me use this opportunity to call on Nigerians to redouble their efforts in eliminating the problem of drugs abuse.

“This is important because the younger generation who are more affected can provide quality leadership when they take over the leadership of our country.

On my part, I will continue to support the efforts in this regard.

“My office has been in the forefront of the campaign against drug abuse and other forms of abuses that seek to destroy the very fabrics of our society,’’ she said.

According to her, my passionate commitment towards tackling the drug abuse menace prompted the inauguration of the Presidential Advisory Committee on the Elimination of Drug Abuse.

“The committee exists under the leadership of Brig.-Gen. Buba Marwa (Retd) who is currently doing a great job as Chairman, National Drug Law Enforcement Agency (NDLEA),’’ the first lady said.

Marwa, who is the guest speaker at the anniversary, called on Nigerians to support NDLEA’s efforts and own the fight against abuse of controlled substances in the country.

“Due to the complex nature of the drug problem, we are aware that we would not go far on this mission without the support of the public.

“That is why we are changing gears, to now say, let the public buy in and own the fight against controlled substances. We have decided to make the campaign the people’s war,’’ he said.

He said that the agency had set up some mechanisms such as the Special Purpose Committee that drew a pool of stakeholders to join its advocacy against illicit drugs.

According to him, the agency has met opinion leaders, organisations, royal fathers, strategic institutions, religious and civil organisations to rally Nigerians for this fight-to-finish campaign against drug trafficking.

“So far, the message is warmly received. We have the confidence that once the people are on our side, the country is on track to winning this drug war,’’ Marwa said.

The Chairman, Presidential Diary Magazine, Alhaji Muhammed Tukur, who said that herdsmen were not known with criminalities years ago, appealed to the NDLEA boss not to relent efforts in the fight against those that deal in drugs.

The Editorial Adviser of the Magazine, Dr. Abubakar Jimoh, said that the magazine was established to support in communicating the Change Agenda of President Muhammadu Buhari’s administration to the public.

“This is because communication of the government’s projects and programmes should not be left for government alone,’’ Jimoh said.

He added that the magazine was also established to promote national unity and create jobs for youths to realise their desires in life. (NAN)

I regret ever knowing you, I used to buy healing cream...