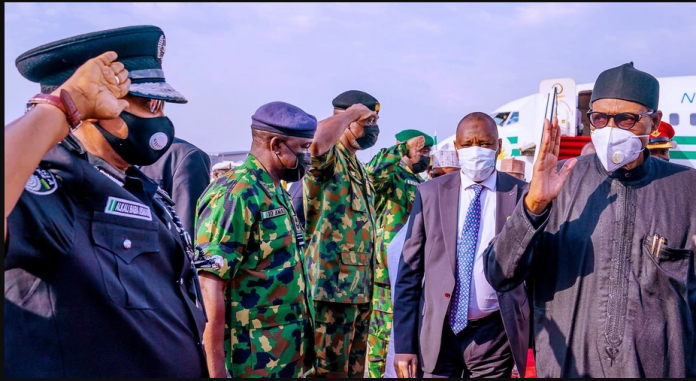 Buhari, 78, won a second term as civilian president in 2019. He completes his constitutionally permissible two-terms of eight years in office in 2023.

In 1985 as military president, however, Buhari was overthrown and supplanted by Ibrahim Badamosi Babangida (IBB), back when coup-d’états were in vogue.

In a statement issued by the Special Adviser to the President on Media and Publicity, Femi Adesina, the presidency says “championed by some disgruntled religious and past political leaders, the intention is to eventually throw the country into a tailspin, which would compel a forceful and undemocratic change of leadership.

“Further unimpeachable evidence shows that these disruptive elements are now recruiting the leadership of some ethnic groups and politicians round the country, with the intention of convening some sort of conference, where a vote of no confidence would be passed on the president, thus throwing the land into further turmoil.

READ ALSO  NBA has threatened to sue FG over the Twitter suspension.

“The agent provocateurs hope to achieve through artifice and sleight of hands, what they failed to do through the ballot box in the 2019 elections.

“Nigerians have opted for democratic rule, and the only accepted way to change a democratically elected government is through elections, which hold at prescribed times in the country.

“Any other way is patently illegal, and even treasonable. Of course, such would attract the necessary consequences.

“These discredited individuals and groups are also in cahoots with external forces to cause maximum damage in their own country.

“But the presidency, already vested with mandate and authority by Nigerians till 2023, pledges to keep the country together, even if some unruly feathers would be ruffled in the process.”

The Army has also warned in a statement that it will continue to pledge allegiance to the democratically elected government of Buhari; and that it recognises Buhari as Commander-in-Chief of the Armed Forces.

There has been heightened insecurity across Nigeria; with arsonists, terrorists and kidnappers wreaking havoc across the geopolitical regions every other day.

President Buhari has convened two emergency security meetings within a week as he attempts to keep a firm handle on things.

Kebbi Attack: Army confirms the death of a student Free 7...