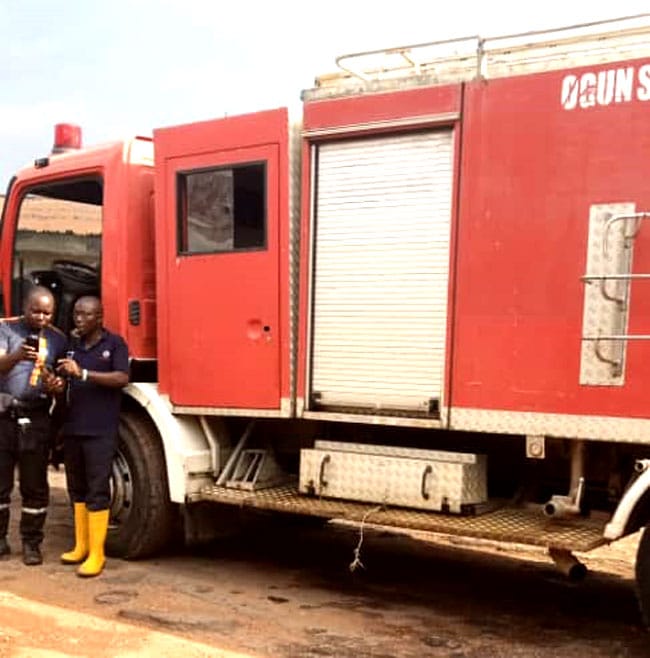 A gas explosion has killed three persons in the Igbore area of Abeokuta South Local Government Area of Ogun State.

The Public Relations Officer of the Ogun State Traffic Compliance and Enforcement Corps (TRACE), Babatunde Akinbiyi, confirmed the incident which occurred on Wednesday.

He added that four other persons sustained injuries from the explosion which occurred in the state capital.

According to an eyewitness, the fire outbreak was caused by the leakage of the hose used in passing refrigerant fluid into a freezer.

Following the leakage, a fire was said to have broken out as a result of a naked fire from another gas cylinder used to fry fish after which emergency responders arrived at the scene.

A truck of the Ogun State Fire Service at the scene of the explosion.

The seven injured persons who sustained various degrees of burns were taken to the Federal Medical Centre in Abeokuta, by a combined team of men of the fire service and other security agencies.

On the other hand, two female victims – a woman and her daughter – and a male lost their lives to the incident.

TRACE authorities condoled with the families of the late victims and advised residents to be more careful and exercise caution.

They also appealed to them to control how they use gas cylinders, especially when a naked fire was involved.

Osinbajo No Longer A Member Of Lagos APC – Spokesman

How Armed Robbers Attacked Me, Stole My Belongings In Ogun – Actress Kemi Afolabi