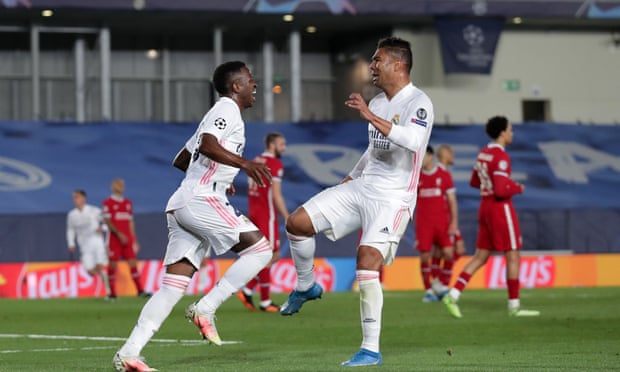 Real Madrid deservedly defeated Liverpool 3-1 in the first leg of their UEFA Champions League (UCL) quarter-final clash on Tuesday night at the Alfredo Di Stefano Stadium.
Liverpool produced a rehash of their 2018 UCL final results, losing by a similar scoreline.
The Reds conceded a goal to Real Madrid, while 20-year-old Vinicius Junior netted twice in what was probably his best match for the 13-time UCL champions.
In place of the wounded Sergio Ramos and COVID-19-hit Raphael Varane, Eder Militao and Nacho matched in central defense, while Liverpool drafted in Jota to spearhead the attack ahead of Roberto Firmino.

In comparison to the visitors, Los Merengues started boldly, allowing Karim Benzema to fire straight at Alisson Becker while Vinicius’ went deep.
Following a raking long pass from Toni Kroos, the unpredictable Brazilian youngster will crack the deadlock in the 28th minute.
The seasoned German midfield maestro put the ball between two defenders from his own half, and Vinicius paced his sprint perfectly before reaching the ball on the bounce for a well-deserved 1-0 lead.

Real Madrid dominated, exploiting gaps in Liverpool’s porous defense, and finally doubled their lead on 37 minutes, thanks to Trent Alexander-gaffe. Arnold’s The right-back bumped another Kroos deep ball past his goalkeeper, allowing Marco Asensio to pounce and chip Alisson before skillfully tapping into an empty net for a 2-0 halftime lead.
Liverpool had no shots on goal in the first half, but their first of the second half cut the lead in half, scoring a vital away goal. On 51 minutes, Salah was picked out by a rampaging Jota, and the Egyptian striker put it past Thibaut Courtois for his sixth UCL goal of the season.

Surprisingly, Liverpool let Modric through from a Real throw-in, and the seasoned Croatian rolled it to Vinicius, who slotted low into the far corner for 3-1 with his second of the night on 65 minutes.
Real Madrid eased the tempo of the game and cruised to a comfortable victory in Zidane’s 50th UCL game as boss, taking a two-goal lead into the second leg next week in England.