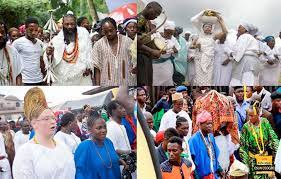 A U.S.-based culture and tourism expert, Ms. Joyce Adewumi, has explained the reasons the Osun-Osogbo festival has continued to attract tourists from the US.

She said the tourists have heard so much about the festival and the sacred water that they want to experience it.

“They have heard that the water is sacred, the water heals, it restores, and that it is a heritage that has been practiced for over 600 years.

“They want changes in their lives, they want to connect to their source and they also want to make a pilgrimage to this deity that people go to every year,’’ she said.

Adewumi spoke with the News Agency of Nigeria (NAN) in New York against the background of the ongoing 2021 edition of the festival which began on Aug. 2 and would run through Aug. 13.

Osun-Osogbo festival, 600-year-old, is celebrated as an annual sacrifice to the Osun river goddess.

“God didn’t make a mistake by giving us this sacred water (Osun-Osogbo). Why are we not embracing it? Let us promote what God has given us.

“Osun (the deity) has made a pact with Osogbo that as long as the 16 candles revival is done, war will not ravage Osogbo and she has kept her promise.

“There has not been a war in Osogbo and barren women have continued to give testimonies for her intervention in their cases,’’ the expert said

Adewumi said embracing some of the ancient practices would cause Nigeria to experience peace and stability again.

She told NAN that security challenges in the country had hampered its tourism potential, noting that so many people had indicated interest to attend the festival.

“I normally take some tourists to the sacred water of Osun-Osogbo for them to appreciate the natural resources and thousands of tourists have gone there.

Adewumi, who is also the Culture Ambassador for the Consulate-General of Nigeria in New York, said no fewer than 200 people had indicated interest to attend the 2021 edition but the number was reduced because of COVID-19.

“So, we are praying that by 2022, COVID-19 would have gone and all these people that have been waiting since 2019 when the COVID started will be able to be in Osogbo,’’ she said.

NAN reports that that the Ataoja of Osogboland, Oba Jimoh Oyetunji, in a statement that said “Iboriade” has been scheduled for Monday, Aug. 9.

Iboriade is a unique assemblage and display of the crowns of the past Ataoja of Osogbo.

The statement explained that the Iboriade event would be led by the incumbent Ataoja of Osogbo, the Arugba, Yeye Osun, and a committee of priestesses.

According to the statement, Friday will witness the grand finale, which is the sacrificial offering by “Arugba” at the Osun-Osogbo Sacred Grove designated as a UNESCO World Heritage Site in 2005.

The Osun Osogbo festival is the biggest annual religious festival among the Yoruba people and serves as a strong unifying factor for indigenes of Osogboland.

A lot of your faves drive exotic cars but have weak...