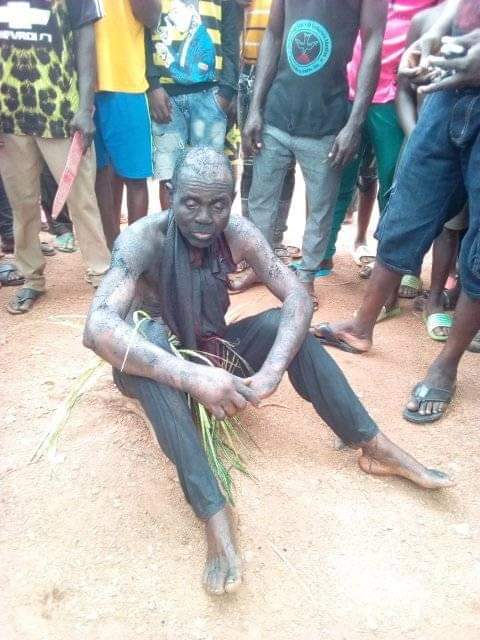 There was serious commotion in Obubara Junction area of Ebonyi state after youths found human parts, charms and names of people written on a strange wood inside a church.

The Incident happened on Tuesday leading to destruction.

According to IGBERE TV correspondent who was at the scene of the incident, the Pastor in charge of the church was stripped naked following the shocking discoveries.

An eyewitness who spoke on the condition of anonymity said the Pastor’s appearance and carriage in the so- called church environment has been noticed by many of the villagers to be suspicious, but for the sake of peace and law of karma no one has ever discuss anything unethical to him.

According to him, “Thanks to Almighty God who has made every of his secret known today by the villagers of Obubara junction in Izzi LGA.”

“The Pastor was seen this morning making strange incarnations with a dead goat which the owner of the goat, a man living close to his church has searched for it for days now but, the goat was no where to be found.”

“As God may have planned his arrest. He was still making the incantation when the man by passed and saw him with the dead goat. He asked, him where he got the goat but, he denied haven access to the goat.”

“The owner raised alarm which attracted other neighbours, the so- called pastor was still proven stubborn when it attracted attention of many other villagers.”

“The angry mob entered his church and discovered a lot of unusual things like, charms, human parts, people’s names written on a strange wood”.