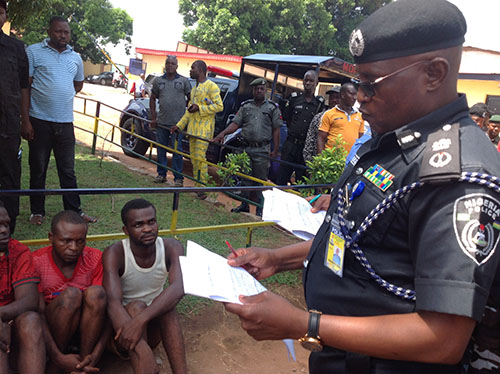 Benue State Police Command has arrested 131 suspects between February and May 2021 for various offenses.

Addressing journalists at the state headquarters in Makurdi on Wednesday, the state Commissioner of Police, Audu Madaki said that within the three months, the command recovered 32 exhibits and 727 live ammunitions among others.

CP Madaki said that the command had embarked on a robust community policing strategy to combat crime and criminalities in the state.

He also explained further that about 131 suspects are now awaiting trial in prison custody and are being charged for various offenses ranging from armed robbery, rape, cultism, kidnapping, mischief by fire among others.

He stated that the command during the time under review recovered 32 rifles of different calibres including six AK47, one G3, three double-barrel guns, and 22 locally made pistols.

Madaki observed that the locally made pistols were more in number because most of the blacksmiths are within the state and have been selling the arms to criminals.

“The command is not resting on its oars to rid the state of criminality. Between February 22 and May 2021, a total number of 131 suspects have been arrested for various crimes and some of these suspects have been charged to court.

“Within this period, the command also recovered 727 live rounds of ammunition and 27 live cartridges.

Speaking on future plans, CP Madaki said the command had been enforcing relevant federal and state laws while working with Benue stakeholders to end crime and criminalities in the communities.

He noted that in the Sankara axis which were flashpoints for banditry, the command had established operation and deployment points at Katsina Ala, Gbor, Tor Donga, Abaji, and Anyiin to ensure peace and sanity in the area.

“We identified all market days and flashpoint areas in this axis and deployed police personnel to ensure that bandits do not come to terrorise the marketers.

“Today, because of the resilience, focus, and determination, our men in these areas will be rewarded for their brilliant performance on the field.”

Officers given performance awards are OC Operation Zenda, CSP Justin Gberindyer, for impressive performance in crime prevention and protection, DPO of Katsina Ala and Daudu, Danjuma Ibrahim and Nurudeen Oyekunle respectively were was recognised for their excellent performance in their respective areas.

Others include the OC Federal High Ways, DSP Tersoo Ugbe, DPO of Ado local government, Benjamin Achimugu, for his passion and impressive performance at the borders areas of Benue and Enugu, ASP Danlamin Usman for his courage and bravery in Cordon and Search operations in Sankara axis and the Police Public Relations Officer, PPRO, DSP Catherine Anene who was recognised as Capacity PRO.

The Commissioner said the awards were in line with the directive of the IGP that men and officers must be encouraged to boost their morale to put in their best.

He commended the recipients and urged them to keep up their good work just as he urged all men to do their best in the field.

Speaking on behalf of the recipients, the PPRO, DSP Catherine Anene thanked the IGP and the Commissioner for finding them worthy with a pledge to put in more efforts in the service of the Nigeria Police Force and people at large.