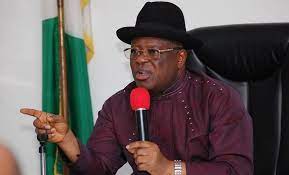 The state government also denied a rumor that herdsmen had attacked schoolchildren in the state. Umahi made the announcement during a press conference held immediately following an enlarged security council meeting at the new Government House in Abakaliki.

“I’m not standing for either IPOB or ESN, but they continue to deny involvement in the violence but for me, criminality is criminality and I have directed security agencies to crackdown on all criminal activities in the state. And for those who did the killings, the security agencies must bring them to book within 72 hours, they must do that.”

Two soldiers and other victims were killed by gunmen on Monday night in the state. The governor directed that all wake keep in the state must end by 6pm and that anyone who defaults would pay a minimum of N1 million fine.

“We have directed that all wake keep in the state must end by 6:pm and the local government chairmen, security agents and Ebubeagu must enforce this. All social activities must end by 6pm. When you defy this order, you will pay a minimum of N1million because a lot hoodlum activities that happened this week happened in the night”.

There will be executive order to this effect and anyone that is caught doing otherwise will be arrested and will be prosecuted. “We are aware that there are some killings over the weekend; a policeman was killed, two soldiers were killed and I think one civilian and their killers are pure bandits.

They do these killings and put it in social media that they are members of IPOB or ESN. “We agreed that there is rampant of fake news in Ebonyi State. Like today, somebody posted that herdsmen are in Ebonyi and they are killing people and schools started closing down; students and pupils started running helter skelter.

As part of measures to stem the tide of the unwarranted killings in the state, the governor imposed a curfew between 8pm and 6am on every entry and exit point across the state.

Denies rumour of herdsmen attack on schools Also denying the rumour of herdsmen attacks on schools, the Commissioner for Security and Border Peace and Conflict resolution, Mr. Stanley Okoro-emegha said no such thing happened. Vanguard gathered that children yesterday morning were seen running back to their various homes alleging that suspected herdsmen were attacking schools shouting, “Fulani people want to kill us oooo, Fulani people want to kill us ” According to the Commissioner:

“They saw some people; these Hausa people that sell cows at the back of Government House carrying their cows and one of their cows strayed into a school and they now said it’s Fulani and started running. As I speak, the children were not attacked. I have sent people to the place and I have also called the teachers of the school to return to their school, ” Emeagha said.

Meanwhile, some parents were sited in some schools picking their children while some private schools locked their school gates and surrounded their school premises with security agents.

Recall that the state government had banned open grazing in the state and also advised the herdsmen not to return to the state until normalcy returned. A private school (names withheld) sent out text messages to parents informing them that second term examination of their children/ward would commence this week because of the rising insecurity in the state.

“Dear Parents/Guardians, due to the security challenges in our country, we hereby reschedule our 2nd term examination to start this week. Let’s join hands and secure our children. Thank you…”

BREAKING: Bayelsa Imposes Curfew From 8pm To 6am Over COVID-19

Six communities in Anambra are subject to curfew.

Hushpuppi: There Will Be Others Involved if Abba Kyari is Found...